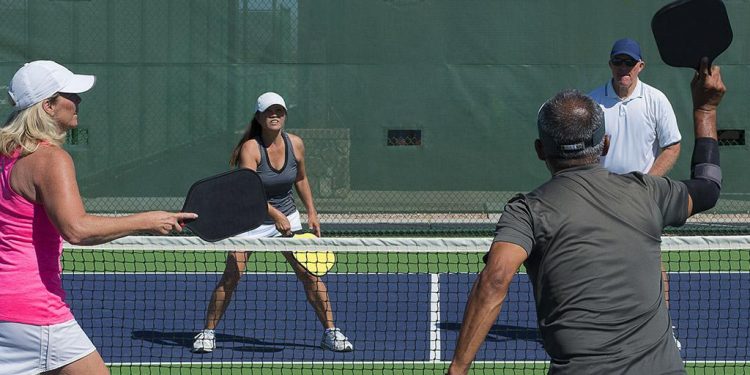 It’s no secret that the number of people playing pickleball across the United States is rising. Have you ever wondered why is pickleball so popular? I do, that’s why! My curiosity about pickleball is piqued whenever I read about its continued growth in popularity or hear about new countries adopting it.

The question of what makes this game so unique and why people engage in this game frequently crosses peoples’ minds.

As soon as I realized that this was the most asked question people had regarding this sport, I decided to talk about it.

Without further ado, let’s get to the specifics of this article, which you may have already guessed the topic of.

Why is pickleball so popular?

If you doubt this, simply Google “what is the fastest growing sport in America,” and the word “PICKLEBALL” will appear in large letters. Pickleball is the most well-known in America.

Many celebrities enjoy playing this sport, including Greta van Susteren, the Kardashians, Matthew Perry, Leonardo DiCaprio, and the list will keep going on because it is everyone’s favorite.

I love pickleball, but I just wish it was called something else.”

It’s true that the term “pickleball” is odd, especially for such a globally popular sport, and I have to admit with him on this point. However, the origin of the pickleball word is even more entertaining than the sport itself. Read it for yourself here. ( )

Despite the fact that USAPA touts over 124,000 participants, plenty more people enjoy this sport outside of the organization due to their participation in less professional games.

About 6 million players play 20 million games annually because the sport has become so well-liked.

I realize you must still be wondering why this game is so well-liked, though. Therefore, the answer is that various factors play a role in its widespread fame.

I’m going to list some factors that contribute to the game’s popularity below to help you understand it better.

1. Sport’s widespread appeal stems mainly from the fact that it can be enjoyed by a person of a different generation, from young children to the full grown-up.

2. It is a social sport as it can be played on a court with four players at once, which encourages interaction between players and makes the activity an excellent chit-chat game to play on a pleasant Sunday evening to discuss all the gossip of the week.

3. The rules of this sport are so simple that even a child could play it and have a chance of winning; in fact, its simplicity is one of the greatest draws in its popularity, as it gives even the most novice players a chance to compete and enjoy themselves.

4. There is no need to look for a vast area to play; a parking space or back garden will do just fine for setting up a net and organizing your tournament.

5. Another reason is that it is within most people’s price range, yes! It is a sport that people from any part of the world and of any age can easily play because it doesn’t require a lot of bulky or expensive equipment—just a Wiffle ball, a net, and a racket—trust me, that’s all you need!

Why play pickleball but not tennis?

Since it is my favorite sport, I highly recommend it to anyone interested in trying something new. It’s easier to learn than tennis and requires less physical stamina, making it a popular choice among players of all ages.

If you’re still trying to figure out why to try pickleball and why is pickleball so popular, don’t worry. I’m sure that the reasons I’m about to give you will convince you to get some rackets and wiffle ball, set up a net in your backyard, and start playing.

This is what happens to folks when they learn about this sport; it’s why this sport has become so well-liked.

I’m going to outline a few reasons to try this sport, so you all get a clear idea of the game. The game is a lot of fun.

Pickleball is a fantastic pastime for people of all age groups, as there are no age limits, and everyone plays by the same set of rules, making it both easy to pick up and a lot of fun to play.

You can play pickleball at any skill level

Do you enjoy pickleball? If Yes, then you must know how straightforward the game is, but if you do not play this game ever before

If you’re skilled with other racket sports like ping-pong, tennis, or tennis, you’ll have an advantage over the competition in learning this sport. If you haven’t already, don’t stress; you’ll get the hang of it.

Pickleball is a social sport

Pickleball isn’t any more a “new” game. There is much buzz about it, and people invite their pals or participate in meeting new people. After just a few games, many people become addicted to the game for many reasons.

Public demand for this game has led to various sports departments either creating brand-new courts or converting existing tennis courts to allow the sport. This entertaining activity can be enjoyed no matter the weather, as it can be played indoors and outdoors.

Unlike other sports, Pickleball doesn’t break the bank

You won’t need to spend wealth on equipment because the sport is so inexpensive. This is a massive attraction for anyone looking for a way to get in on one of the world’s most popular sports on a shoestring budget.

Playing this game is beneficial for health

Pickleball is so easy on the body that it won’t put your health at risk; instead, it will help you improve your posture, reflexes, and coordination. After a game of pickleball, your body won’t feel exhausted; instead, you will feel energetic and healthy.

You don’t need to be an expert for this

Playing pickleball requires much less skill than tennis because of how simple the game is.

Much less effort than tennis

You won’t need nearly as much effort with your arm and shoulder when playing tennis. It can fit more players on the court.

The tennis courts can only fit two players at a time, whereas pickleball courts can allow four players at once, making it more like a social game.

Q: How hard is it to practice pickleball?


Pickleball is not close to hard; instead, it is so easy to enjoy and practice.

Q: How long is a game of pickleball?


It won’t take much the most time; whoever reaches the 11 points first will win the game, and it will take 15 to 25 minutes to finish and win the game!


Yes, pickleball is an old person sport, and primarily adults love to play it.

Q: What age group plays pickleball the most?


Mostly adults, well, the game can be played by people of all ages, but the people who love to play it most are mostly 30 to 60!

No one can predict the future, but I do not doubt that the current participation rate of 5-6 million will increase dramatically in the years to come, making this the most popular sport in the world by far. As I discussed above, there could be many reasons why is pickleball so popular, from its accessibility to its versatility as a game.

My name is Ethan Josephson. I am a pickleball enthusiast who has been playing this fantastic game for more than 5 years. Before that I had almost 20-years-experience with tennis and table tennis, but pickleball fascinated me completely.